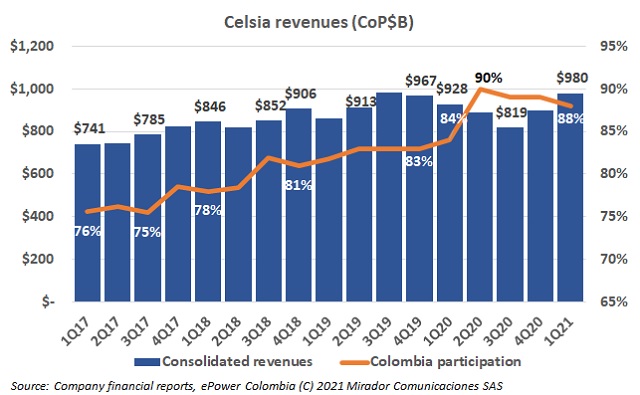 Celsia, energy company of the Argos Group, reported its results for the first quarter of this year.

The company’s consolidated revenues were CoP$980B in 1Q21; 6% more compared to the same period last year (CoP$928B), according to a press release.

Operations in Colombia reported an EBITDA of CoP$289B in the first quarter, representing 86% of the consolidated result; this metric decreased 0.5% compared to 1Q20.

“The improvement in the generation of EBITDA, the income from the greater investments in network assets and the reduction in financial expenses due to the effects of the indexers allowed the consolidated net profit to reach CoP$115.7B,” Celsia highlighted.

Celsia invested CoP$211B during the first quarter of this year; CoP$204B was in Colombia and CoP$6.6B in Central America.

“In January 2021, the balance corresponding to the acquisition of Celsia Move electric buses for CoP$87B was canceled. In December 2020, the 120 electric buses began to operate in Bogotá’s mass transportation system, Transmilenio, which is operated by the Gran Américas Consortium,” the firm said.