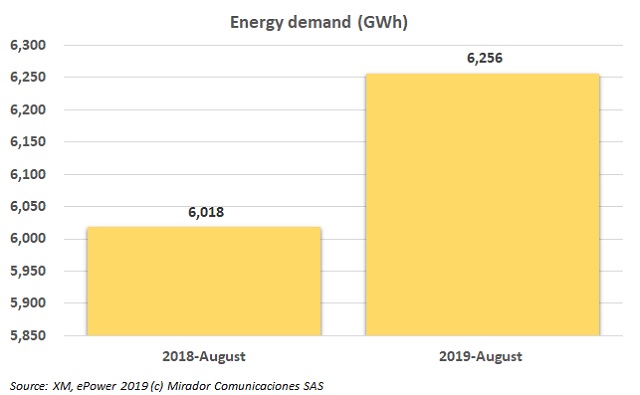 XM, operator of the National Interconnected System (SIN) and administrator of the Wholesale Energy Market (MEM) reported the behavior of energy demand during August this year, with positive results.

According to a press release, energy demand was 6,256GWh in August this year, which means 3.97% more compared to same period last year, when it was 6,018GWh. The cumulative figure was 47,589GWh during the first eight months of 2019, while it was 45,688GWh for the same period last year.

“Demand is falling in the middle scenario of the Mining and Energy Planning Unit (UPME) forecasts,” commented XM.

XM explained that the growth in energy demand is calculated as the weighted average growth of different types of days (commercial, Saturdays, Sundays and holidays).

Jaime Alejandro Zapata Uribe, Manager of the National Dispatch Center of XM, commented that energy demand grew 4.17% in between January and August this year, and the regulated market played a key role.

“It is important to note that regulated demand (residential and small business) has been an important growth player in the last month,” said Morales.

Bottom-Line: Energy consumption continues to show a good performance and expectations are positive. Authorities must work to encourage the development of new generation projects and thus ensure supply in the medium and long term.