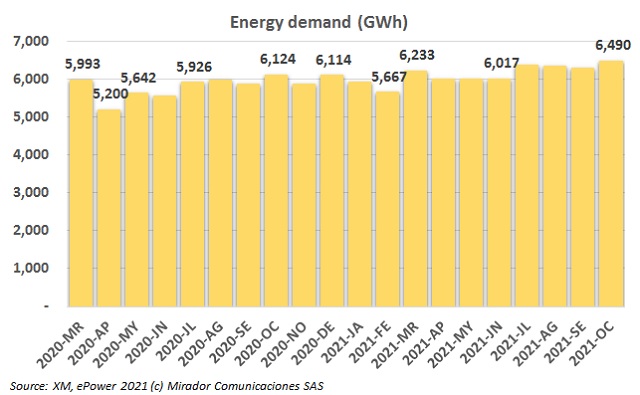 XM, operator of the National Interconnected System (SIN) and administrator of the Wholesale Energy Market (MEM), reported on the behavior of this metric in October 2021.

The agency explained that the regulated market represented 67.56% of the total demand in October; this metric was 4,361GWh in October 2021, while it was 4,248GWh during the same period in the previous year.

The unregulated market represented the remaining 32.44% of the demand, increasing 13.84% to 2,094GWh in the same period.

Colombia exported 141GWh to Ecuador in October, representing 40% of total energy exported during the month.

“The country’s energy demand continues to show a recovery after the impact of Covid on national consumption,” XM’s Jaime Alejandro Zapata Uribe.

He said that hydrological levels have been above the historical average, bringing the system’s aggregate reservoir to 10-year highs in the last nine months,

“This is leaving the system with water reserves that minimize the risks for meeting demand in the coming summer,” Zapata highlighted.