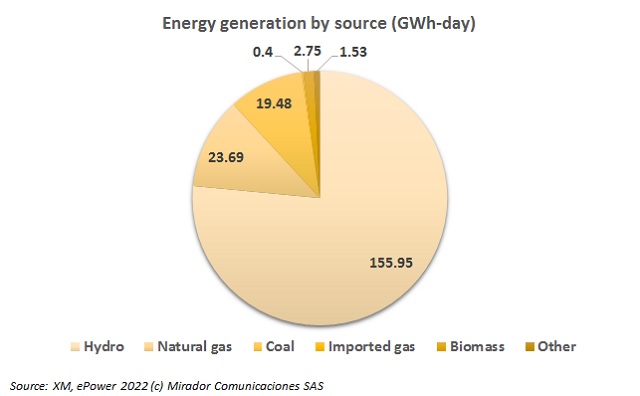 Total non-renewable (fossil fuel) generation for the month of December was 43.79 GWh-day, 54.18% more compared to the previous month.

Gas was the largest contributor with 54.10% of the non-renewable resources segment, equivalent to 23.69GWh-day average; followed by coal with 44.47% or 19.48GWh-day average. Imported gas and liquids represented the remaining 1.42%.

XM’s Jaime Alejandro Zapata Uribe said that the Colombia imported a total of 105.59GWh in December from Ecuador.

“From XM, we continue with a permanent monitoring of the system variables and work with the Ministry of Mines and Energy (MinEnergia) and the other actors to guarantee the provision of the service with safety and reliability,” Zapata said.

As well, the country reported high levels of water reserves, but it was insufficient to meet local demand, creating the need to import energy, whereas a few months ago, the sector was exporting to Ecuador…