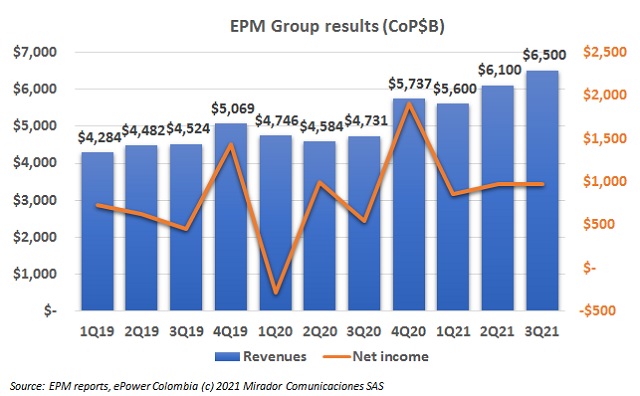 The EPM Group reported its results for 3Q21. Here are the details.

The company reported consolidated revenues of CoP$18.2T during the January-September 2021 period; 30% more than the same period last year, the firm said in a statement.

Revenues were CoP$6.5T in the third quarter of this year, increasing 37% compared to same period in 2020.

The company explained that the business group generated distributed added value for CoP$9.3T in the January-September 2021 period.

EPM’s Jorge Andrés Carrillo Cardoso said that when the EPM Group does well, the territories where it is present and their communities also do well.

“The company contributes to the economy, the generation of employment and the realization of large infrastructure works,” Carrillo highlighted.

The company said that the good performance of the commercial operation, higher energy sales in distribution and increasing costs more slowly than the increase in revenues were key to getting these positive results.

Results obtained by EPM Parent Company during this year were also positive.