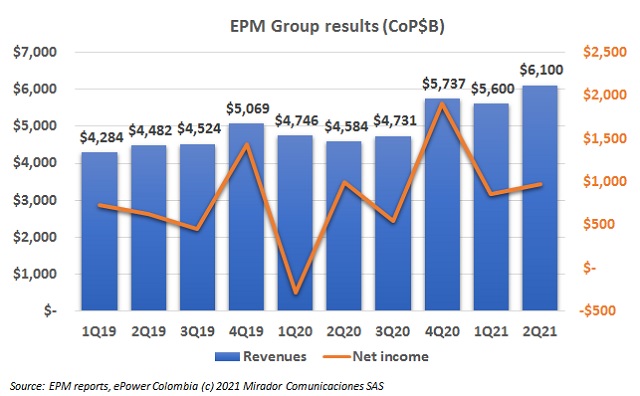 The EPM Group reported its results for 2Q21. Here are the details.

The company reported consolidated revenues of CoP$6.1T during 2Q21; 26% more than the previous year (CoP$4.6T), the firm said in a statement.

This metric increased 9% compared to previous quarter, when it was CoP$5.6T.

“EPM is an important engine in the development of the territories in which it is present, with the construction of large infrastructure projects,” the firm said.

The company explained that the business group generated distributed added value for CoP$6.1T in 1H21.

“These positive results will also allow EPM Group to continue providing its services with high standards of quality, continuity and coverage for the benefit of users and communities in general,” EPM highlighted.

EPM’s Jorge Andrés Carrillo Cardoso said that these positive figures were achieved in part thanks to the community’s commitment to paying their utility bills, to the improvement in commercial operations, and to higher energy sales.