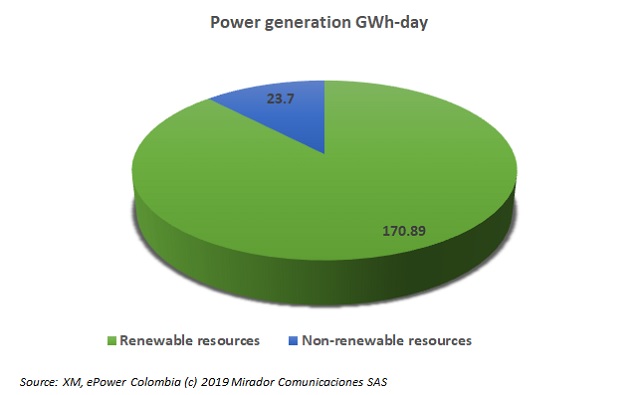 XM reported the energy generation distribution in July this year. Renewable resources (including hydro) remain as the main player in the Colombian energy matrix.

The energy generation with non-renewable resources grew 6.07% compared to June; while the renewable increased 0.83%.

Hydro generation with 98.41%, equivalent to 168.18 GWh-day average, was the source of energy with the greatest contribution in the renewable energy segment. This source grew 0.71% compared to previous month.

Hydro plants were the largest contributors with 86.57%, equivalent to 147.93 GWh-day average in hydraulic generation. This grew by 2.88% compared to June.

Natural gas was the largest contributor with 67.32% in the generation segment with non-renewable resources, generating 16 GWh-day on average. This grew 1.05% compared to June.

Jaime Alejandro Zapata Uribe, Manager of the National Dispatch Center of XM, commented that thermal generation and hydro plants increased their participation in the energy matrix during July, compared to previous.

“This behavior is consistent with the lower water contributions presented in July, which is reflected among others, in a lower generation of water-edge plants,” pointed out Zapata.

Bottom-Line: The graph shows the distribution of power generation in July this year. Colombia has been characterized by relying on hydro plants for power generation, but the country must do more to boost other energy sources.

Hydro plants are a clean and renewable source, but the country is very exposed to natural phenomena such as “El Niño”.