Use of renewable energies 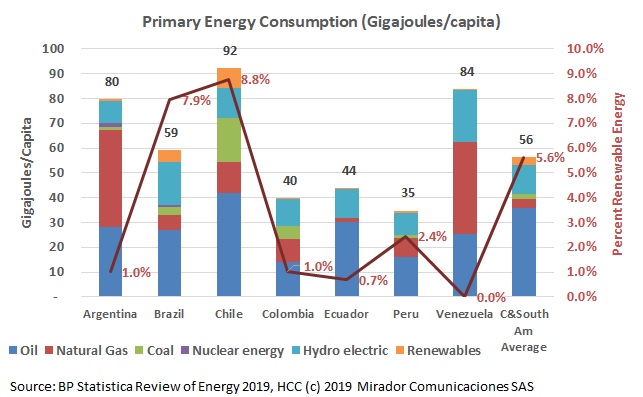 The world is looking to reduce pollution levels and renewable energy is playing a key role in this process. The generating capacity and use of these energy sources has grown considerably in recent years worldwide.

According to Portafolio, clean energy will provide 18% of the electricity to the world this year. The use of renewable energies quadrupled in the last ten years.

The United Nations (UN) environmental sectional pointed out that investments in this segment have been US$2.6T this year globally.

The UN explained that renewables (not counting large hydroelectric plants) generated only 4% of the world’s energy capacity at the beginning of 2009. However, just solar and wind energy are expected to generate 18% of the electricity consumed in the planet at the end of 2019.

The UN, together with the Frankfurt School and Bloomberg New Energy Finance, made a report on “Global Trends in Renewable Energy Investment 2019.” The entities said that renewables capacity (excluding large hydroelectric plants) went from 414 gigawatts in 2009 at 1,650 gigawatts this year.

Solar energy is the source that has reported the most outstanding growth in these years. The solar power capacity was 25 gigawatts at the beginning of 2010 and this metric is expected to be 638 at the end of this year.

“Few would have dreamed that at the beginning of 2010 the solar energy would have more added capacity throughout the decade, 638 gigawatts, than any other power source (renewable, fossil or nuclear),” says the report.

However, the report recognizes that the ‘greening’ of the energy system still has a long way to go.

“Investing in renewable energy is investing in a sustainable and profitable future, as shown by the incredible increase in renewables in the last decade,” pointed out Inger Andersen, Executive Director of UN Environment.

Bottom-Line: The graph shows primary energy consumption in gigajoules on a per capita basis by source. In Latin America, oil is always the biggest contributor and renewables are almost insignificant in 2018, except for Chile and Brazil (which brings up the regional average). Colombia, at 1%, has a long way to go. (For those wondering about Colombia’s seemingly low hydro contribution, the number you might have in your head – 70% – applies to electricity generation. This graph represents all energy not just electrical.)

Without a doubt, renewable sources are the world’s energy future, and these are starting to gain ground. As the UN says, the road is long, but it seems like renewables are on the right track.