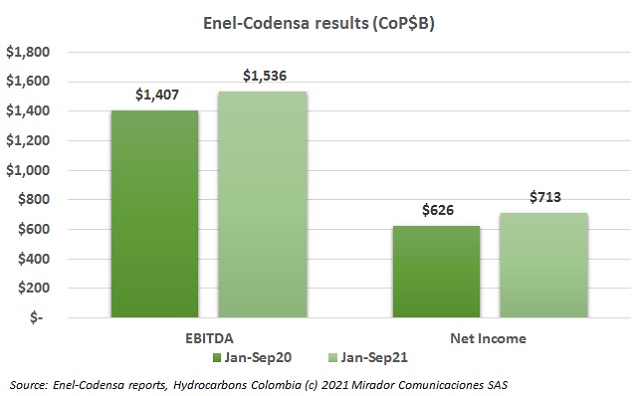 Enel-Codensa announced its financial results for the nine months of the year.

The company reported a 10.8% increase in operating revenues to CoP$4.6T in the January-September 2021 period; this was CoP$4.2T in the same period last year, according to a press release.

The company explained that the increase in operating income is the result of higher revenues from the incorporation of new assets in the regulated rate base, the 6.7% year-over-year growth in energy demand in Enel-Codensa’s area of influence and the improved performance of value-added products.

“The increase in EBITDA was thanks to revenue growth and efficiencies in fixed cost management,” the firm said.

Net income went from CoP$626B in the first nine months of 2020 to CoP$714B in the same period this year, representing an increase of 14% compared to same period last year.

Enel-Codensa reported investments of CoP$658B during this period, focused on the modernization and maintenance of distribution infrastructure, telecontrol, substation repowering and capacity expansion of lines and circuits.